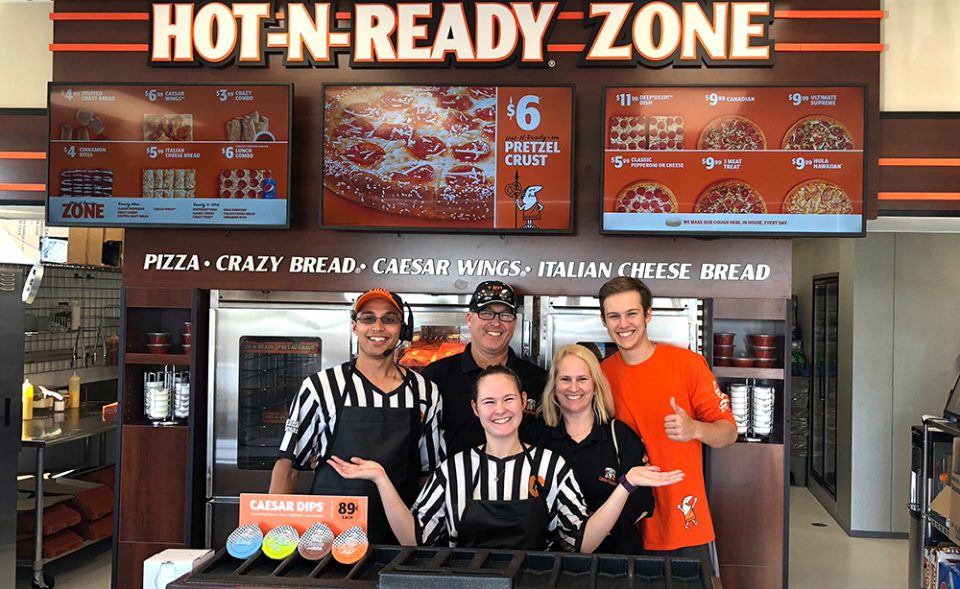 Kianna Jensen opened her first store as a Little Caesars pizza franchisee at 19, but consider­ing she’d been thinking about it since age 10, she may have been more prepared than her age may let on. Now 22, she recently followed up her first location in Steinbach, Manitoba with a second in nearby Deacon’s Corner and is already in the planning stage for her third store.

Jensen had an adult ally in her father Scott Cook, who helped her to research various franchising options, mainly in the restaurant industry. The choice became clear before too long. “Little Caesar’s was the No. 1 option for us because they were really family oriented,” she says, adding that the franchise’s focused menu also seemed ideal for a starter project.

In spite of her enthusiasm, the franchise needed convincing. They were not apprehensive about having Jensen join the brand as a franchisee, but rather were concerned about Steinbach. Located just over half an hour from Winnipeg, Steinbach is home to just 16,000 residents. Jensen made the case for the potential for a Steinbach Little Caesars franchise to attract customers from the many surrounding small communities (Jensen’s grandmother was born there, so it was familiar). Jensen says that once the franchise system was on board with her plan, they were all in. “They were super awesome the whole way along, helping us out with Steinbach and everything, considering it was our initial belief that brought it to the table. They treated it like it was theirs, and they believed in it 100 per cent.”

After signing on to open her franchise, Jensen worked for six weeks at a Little Caesars location in Niagara Falls, Ontario. It was there where she got some invaluable hands-on experience. “I got to work open to close at an actual franchise with a franchisee who had initially been one of the head office members overseeing all of Canada. He was very knowledgeable, so that was very reassur­ing for me,” Jensen says, adding how Little Caesars also sends a coach from head office to new locations for the first two weeks after opening. “It was an extra set of eyes that knew how to do everything. Taking off half the pres­sure like that is immensely appreciated.”

When she returned to Steinbach, Jensen also had the support of her entire family, who had moved there from Winnipeg. Today, both Jensen’s father and mother Irene are still involved in the franchise’s operations, mainly handling paperwork. Her brother Kyle is also central to the operation, currently managing the Steinbach store as Jensen focuses on launching the new Deacon’s Corner location with the latest partner in the venture, husband Andrew Jensen.

Looking ahead to her new store in Deacon’s Corner, Jen­sen expects challenges. After having the experience of opening her Steinbach store under her belt, however, she’s ready for anything. With her first store, she discov­ered that establishing herself as an authoritative voice as a millennial franchisee was a bit tough. “We’ve had a very hard time finding people that are older than us that can actually listen to us from a man­agement perspective,” she explains. Jensen says it’s chal­lenging being a young franchisee with customers too. “I find that it’s very hard to have people take you seriously. I look very young, so I have a lot of people treat me like a kid. When they ask me if they can speak to the manager, I tell them, ‘I am the manager,’ and they say, ‘Well, can I speak to the owner?’ ‘I am the owner. What can I do for you? I’m helpful, I promise.’ They’re very quick to get angry with you.” Jensen says she handles it by remaining calm. She also uses different coloured shirts to distin­guish managers from staff, an effective visual.

In a small community like Steinbach, Jensen says that community involvement is key for building a profile for the business. The Steinbach store does a toy drive at Christmas, donates pizzas to an area food bank, sup­ports the local hockey team, and gets involved in the children’s school hot lunch days.

While Deacon’s Corner does not have a competing pizza franchise as of yet, Stienbach has several, from major franchises to independent stores. So how does Jensen stand out? “We utilize the art of shaker boarding: we send kids out dancing with signs, right out front of the store where we can still keep an eye on them. We let them put one ear bud in, so they have their music, but they can still hear the traffic. They draw a lot of atten­tion,” says Jensen, adding that their most enthusiastic dancer was even named person of the week by the local radio station.

She says it’s very effective. “It’s like a light switch. As soon as they go out dancing with that sign, the sales start pouring in. As soon as they come back inside, peo­ple kind of forget you’re there in the grand scheme of the other pizza places.”

In Deacon’s Corner, Jensen is also taking on a fun new challenge. “We decided ‘let’s get a drive-through and shake things up a little bit!’ Not a lot of people in this area have ever seen that.”

In terms of advice for aspiring franchisees, Jensen says you need to go in knowing what you’re signing up for. “Take into account that it’s going to be really long days and make sure that you’re ready. Know that every­thing you do is going to be worthwhile. It’s hard to be patient when you don’t have faith in what’s to come.” Her other advice? “Don’t ever be comfortable.”

While Jensen is clearly familiar with the area outside her comfort zone, it’s also apparent that she loves what she’s doing. “The best thing about being a franchisee is that you still get to have your own business and work for yourself, but you have a team of highly competent and responsible people working from head office to back you up every step of the way.”

Publisher’s Message: Keeping Up with The Trends