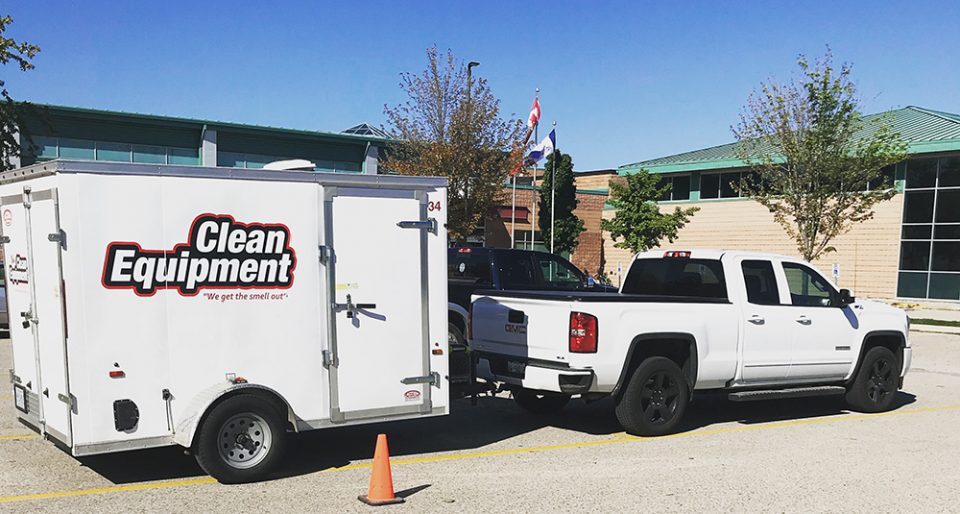 In a world where consumers are relying more and more on the convenience of mobile businesses to complete their daily errands, it’s surprising that the sports sector hasn’t jumped on the bandwagon.

That is until CleanQuip came along. The mobile fran­chise has been disrupting the sports cleaning industry since first entering the market in 2015. Founder Paul Noad’s innovative business model takes a proven clean­ing technology typically used in bricks-and-mortar stores, and brings it directly to the customer.

“The franchise itself is a trailer that’s been retro-fit­ted into a locker room,” says Jamie Wallace, a franchisee with CleanQuip in London, Ontario.

Using what’s called an Ozonator, a CleanQuip trailer circulates environmentally friendly ozone gas to kill harmful bacteria, and consequently the odour that often plagues hockey, lacrosse, football, and other sporting gear across the country. The technology itself isn’t new to the world of sports, but CleanQuip is changing the way the industry uses it.

“The convenience and value of it is that it’s mobile and can be onsite at sporting events or right at your front door,” explains Wallace. “It eliminates the time it would take for athletes to drop off their equipment at a sporting store and then having to wait a few days to go pick it up.”

Moreover, CleanQuip customers can get their equip­ment returned to them in less than an hour. It takes 45 minutes to clean equipment, and with the ability to do multiple cleanings at once, entire teams can have their gear ready at the same time.

For an entrepreneur whose background combines sports and sales, it’s easy to see why Wallace was drawn to the growing franchise. “I was looking for something that I could become pas­sionate about and combine my sales and sports back­ground,” he says. “That’s really what attracted me to the company. I could work in the sports industry with a machine that I knew worked, and I could reap 100 per cent of the rewards.”

Still, to hit his one year anniversary as a franchisee, Wallace will need to quickly learn the ebbs and flows of small business ownership. And with big plans to expand his CleanQuip empire, this first-year franchisee is look­ing forward to the future.

Having only recently opened his CleanQuip location in June 2018, Wallace is just half way through his inaugural year as a franchisee. Still, his short time as a small busi­ness owner hasn’t deterred his success. If anything, he is more impassioned than ever to let future customers know about the CleanQuip ideology.

With any new business, this is easier said than done and it’s a challenge that Wallace was immediately con­fronted with when he first opened shop.

“Getting the concept out there was the initial chal­lenge,” he says. “It really is a disruptive idea, so when I first started people didn’t really understand that they could get their equipment cleaned right there on the spot in our trailer. I think it will always be an ongoing challenge, but people are definitely becoming more knowledgeable about it.”

Spreading the word takes time, but Wallace is quick to point out that Clean­Quip’s head office does an efficient job of marketing on behalf of all franchise partners. Still, the entre­preneur says franchisees must be proactive in their own marketing initiatives to really see results and grow their client base.

For his part, Wallace has stayed active on social media to drive business; using online tools to con­nect and schedule appoint­ments. Couple this with his prior sales experience and his initiative to net­work with potential clients through cold calling, and Wallace has managed to maintain a steady stream of business.

The nature of this busi­ness varies on any given day or week. As he is the sole owner and employee of his CleanQuip, Wallace splits his time between finding new clients and growing his business, to travelling to people’s homes and sports arenas to actually conduct the business. And while he’s performing CleanQuip’s services, Wallace says he’s still marketing the business any way he can.

“I stay active when I’m onsite at tournaments. I’ll give out gift certificates, coupons, T-shirts, and even offer the winning team a free team cleaning. I really rely on that to help spread the word,” he says.

With his background in the sports industry, joining CleanQuip was a natural fit for Wallace. Still, he contin­ues to learn on the job as the franchise expands outside of sports to serve a larger clientele.

“What’s great about it is that the Ozonator can come out of the trailer,” Wallace explains. “Which means, out­side of the sports realm, we can do in-home or office ser­vices to remove any foul odours, whether it be mould, pet, or cigarette smells.”

The sports sector continues to be the franchisee’s central source of business, though he is gradually build­ing business for office and home cleanings. Whether he’s cleaning equipment inside his CleanQuip trailer or bringing his services directly inside people’s homes, he says head office efficiently trains franchisees so they are ready to start serving customers as soon as they finalize their franchise agreement. “I received one-on-one training directly from our owner, Paul Noad. The nice thing is, it’s all practical training which means it’s all onsite, serving customers,” he says, adding how head office is always available to answer any questions he may have about operations, accounting, marketing, or even public relations manage­ment. “They’re reachable, proactive, and definitely reac­tive as far as anything I need.”

Wallace admits his first year as a franchisee has been a busy one, but when you’re doing something you love, the hard work is worth the end-result. For Wallace, working in a sector he loves is one of the many benefits of being a franchisee in the system and he advises other entrepre­neurs who love the industry that they too will fit right in with CleanQuip.

If Wallace can give any advice to those interested in investing with the franchise, he says to do your due dili­gence and know the territory you will be operating in. But when it comes down to it, the first-year franchisee says you should just jump right in.

“Really just enjoy it,” he says. “You’re in for a good ride because it’s a lot of fun.”

Reflecting on his own career goals, Wallace is just beginning to pick up speed. Opening his first CleanQuip allowed the franchisee to achieve the initial goal of being his own boss, though he doesn’t want his future with the company to stop there.

It’s a big goal any franchisee who’s just starting out can set for themselves. Still, it’s something Wallace can justify.

“You can make as much or as little as you want. When it comes down to it, it’s all about rewarding yourself with how hard you are willing to work!”

Day in the Life: Prairie Power!