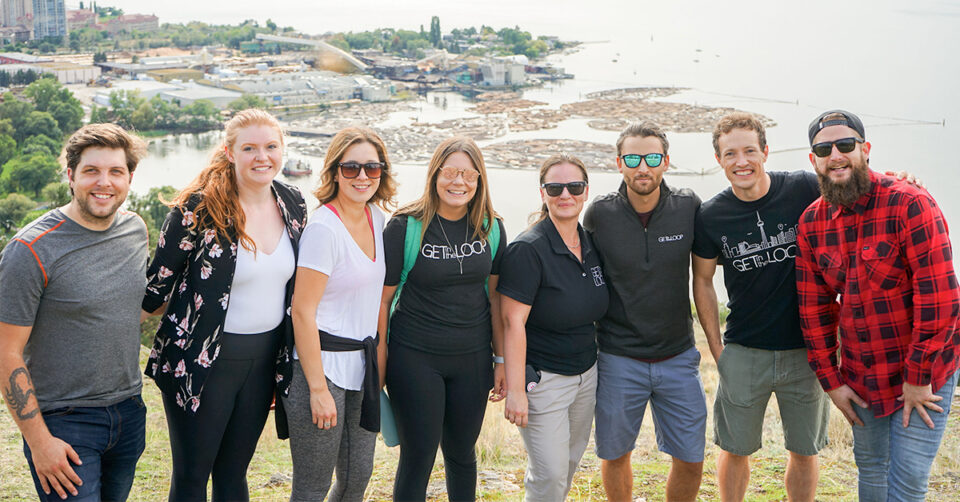 How often does a Facebook browse turn into a business? For Dustin Woodbeck, the journey towards franchise ownership with GetintheLoop began by seeing ads served up on the social platform, and asking a lingering question: “why isn’t there a local app for businesses to advertise directly to users?” When a co-worker pointed him towards GetintheLoop, Dustin knew had to share it with his wife, Marianne. “Right away, we said, we should get involved with this,” he recalls.

Founded in 2013, GetintheLoop has already grown to 4,000 communities in every province across Canada, acting as a platform that helps residents and visitors discover local businesses, restaurants, and events. While they liked what they saw, the couple, married for only three months and both with full-time jobs (Dustin is an engineer and Marianne a kinesiologist), kept an eye on the app for a few weeks before making their decision. “We evaluated the market, talked to people we knew, and had some calls with the franchise,” says Marianne. Increasingly, they realized its potential for their own city of Prince George, B.C., and eventually signed in May 2019.

Training started with a representative of GetintheLoop arriving in Prince George for two days of intensive work on the systems and processes, as well as another two days of pounding the local pavement to meet businesses and introduce the concept.

Dustin says he was impressed from the start by the support from the Kelowna, B.C.-based franchisor. “They have been awesome. I didn’t expect that much support when we first bought the franchise,” he explains. Support includes weekly meetings with a marketing manager, and several channels to reach out for help, including phone, email, and Slack. They’re also connected with franchisees across Canada.

From the start, the Woodbecks had a good response from their community. But they also knew the importance of getting out there to raise brand awareness. The couple started with a variety of events, from setting up booths with giveaways at venues to farmers markets to orientation days at the local university and college.

They also started finding businesses to partner with. “We wrote down a list of businesses that we knew were in the community, really targeted like food and drink and activities,” recalls Dustin, adding that it was a thrill to get some early wins. “A couple businesses were key for the community and I was super pumped because I wasn’t sure they were going to go for it, but I sat down with the manager, and she was like, ‘let’s do this, it’s awesome.’”

Marianne agrees those early clients were a great confidence booster. “Finding the first few partners helped take the doubts from our minds.” Early deals included Trench Brewing and Distillery offering a growler fill discount on the app, and Black Diamond Bowl and Billiards creating a “date night” promo that offered two hours of pool and a meal at a fixed price. The Woodbecks also partnered with the local Western Hockey League team, the Prince George Cougars, by getting involved with their home opener and offering flash sales for tickets.

The Woodbecks say the initial reaction from new clients was very positive. “I think a lot were excited because we didn’t have anything like this in Prince George. They were really excited to get more into the digital side. They also like that all the data is trackable, so they know how well it’s doing, how their offers are performing, and can switch things up.”

Users also liked the app, especially the weekly contests and gift card giveaways. Today, the app has around 6,000 users, and reach has grown to towns outside of Prince George, including Quesnel and Vanderhoof. “Because we’re a central hub to the north of B.C., there’s people from these little towns that come to Prince George to shop and eat,” says Dustin, who grew up in nearby Houston.

The Woodbecks’ next efforts focused on a balance of growing users on their platform and adding businesses to partner with. “We needed to grow our member base, but we also need to provide good offers and great businesses, so our members keep using the app,” says Dustin. In November 2019, businesses started approaching them. “We were doing less drop-ins, and getting more inbound calls and emails. We probably signed like eight or 10 partners in a row. They just wanted to be on it,” says Marianne.

Thinking about the initial challenges, the Woodbecks point to the learning curve of social media and the anxiety of in-person events. “It was a little shocking to get used to obviously, because I’m not from a marketing background,” says Marianne of the platform learning curve, although she admits that her experience in customer service helped.

Of course, the biggest challenge recently was the COVID-19 pandemic. “When it first happened, and you couldn’t really go anywhere, that was a huge challenge. Seeing people face to face is what we do best. With COVID, there’s lots of financial struggles on both sides, for our partners and for us, too,” says Marianne. The couple had just had their first child in early April, so that was another balancing act, as well.

When the pandemic hit, the Woodbecks made a point of reaching out to clients to check in, adjusting some offers to be more COVID-19 friendly, such as focusing on takeout. They also reassured many partners that they could put them on pause to keep them attached to the app as everyone watched things evolve. “It was definitely a really challenging time for us,” says Marianne.

While COVID-19 was an unexpected challenge, being young franchisees turned out not to be. Marianne, 29, and Dustin, 33, say they haven’t noticed too much age bias, possibly because many of their business partners also have younger owners. “I think people are more supportive of us because we’re younger entrepreneurs who are really wanting to put a footprint out in the community,” says Dustin.

In terms of advice for potential franchises, the Woodbecks say it helps to be a sociable person. “If you’re able to just meet a stranger and spark up a conversation with them about whatever, that’s a really good trait,” says Dustin, adding that it’s helped to be local and know the Prince George community.

Marianne says she gets excited about the social media aspect, seeing new followers and downloads, making new relationships with people in the community. Both agree that it fits well with their lifestyle, with the flexibility that they need to work from anywhere (both were working their full-time jobs through the startup, and Marianne is currently on maternity leave).

Overall, the Woodbecks say that being a part of GetintheLoop has been a good experience for them both. “I just like meeting people, and being involved with the community,” says Dustin. “That’s really rewarding, because I feel like I’m actually making an impact, and we’re offering a platform that makes everything feel a little bit more connected.”