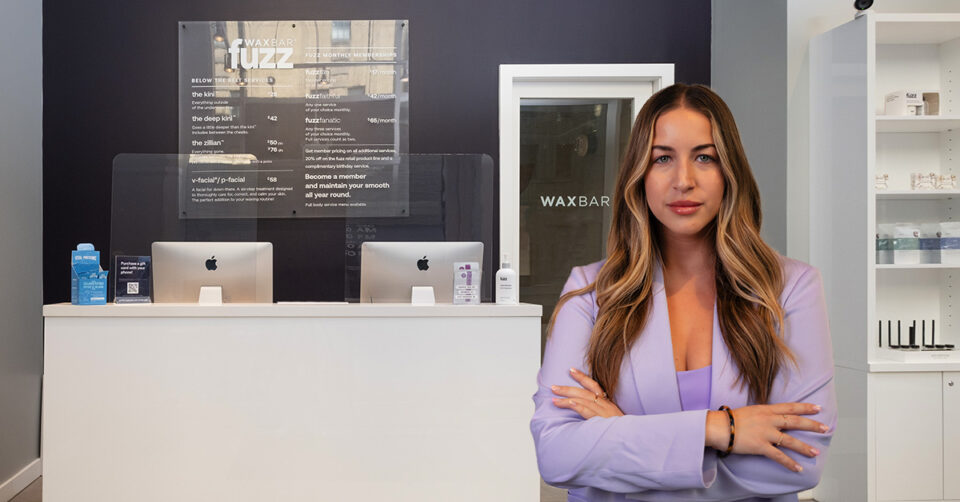 Alexia Pilla always knew she wanted to own her own business. “But I didn’t really have a concept in mind,” she explains. “Which is why I decided to go the franchising route.”

The young entrepreneur applied to a matching service that paired franchise concepts with prospective franchisees, based on personality tests. On the list of potential franchise fits: Fuzz Wax Bar, a membership-based waxing-only salon concept.

“I just fell in love—with the founders, the brand concept, and their values, frankly,” says Pilla. “Which was why I decided to go with them.”

“My goal is to have the highest performing location in the franchise, of course,” says Pilla, with a smile. “That’s the goal I’m working towards.”

The Fuzz brand was founded in Toronto by Jessie Frampton and Florence Gaven Rossavik in 2012. It now has 16 locations across the country and is looking towards U.S. expansion.

As a franchisee with Fuzz, Pilla says, there’s a choice to either be a managing partner, handling the wax bar management day to day, or a semi-absentee owner, focused on growing the business. “Both ways are completely supported by the franchisor,” she says. “They do, however, have a clear multi-unit growth model when they bring on new franchisees, so opening multiple locations is definitely what Fuzz franchisees work towards.”

Pilla was drawn to this ambitious company culture, and she loved that it was coupled with a strong foundation of support from the brand. “I had never run a business—I didn’t know what I was doing. I was brand new to it. So I really needed a franchise where training was very important to them. I needed someone that was going to hold my hand through the process, and Fuzz has extensive, amazing training.”

She adds, “I knew I would have the support I needed.” After determining that Fuzz was the right fit for her, Pilla signed on to buy a franchise in 2017. But this came with its own challenges. “After signing, I really struggled to find a retail space that would fit,” she recalls. Eager to dive in, she asked the franchisors if she could work in some corporate locations to gain in-store experience. After working in three different wax bars, Pilla approached the franchisors to ask if they would consider selling her one of the locations, flipping it from a corporate to a franchised location.

“It came about because I was struggling so hard to find a space, and I thought, ‘I really want to do this, I want to get going.’ And we came up with a solution, which was fantastic.”

Pilla took over the brand’s Leslieville location, tucked in a quietly trendy neighbourhood in Toronto. Along with her experience working in store, Pilla went through extensive esthetician training—to make sure she completely understood the services her business was providing—as well as corporate training from Fuzz that took her through every step of running the business.

“As someone who had no experience, I needed that. They really shaped the business owner I am today,” she reflects. Today, the franchisor’s support is still her favourite thing about the brand. “I feel like I’m in contact with head office probably every single day. If I need extra training, if I need help training someone, if I need advice or need to vent, they’re always there, just a phone call away. And they really guide you through every step, every process.”

Once Pilla was well accustomed to running her first location, she set her sights on a second. Unlike the first, her second Toronto location was a raw space that needed to be built from the ground up. She took on the challenge and was all set for a grand opening—in March of 2020.

Of course, the COVID-19 pandemic created a need to adapt these plans, and quickly.

“Our opening date was pushed back several months. Once we finally opened, we were only open a couple of months before we got shut down again [by COVID lockdowns]. That was definitely a strain, and it was stressful to say the least.” While the shutdowns caused cash flow concerns and pushed back Pilla’s break-even, she was able to rely on the profits from her first location, along with government subsidies.

Aside from the financial challenge of the pandemic, Pilla says the most difficult thing was being apart from her teams. “We have such tight-knit teams, and we’re so used to seeing each other every day. As an employer and an owner, you feel accountable for your team’s wellbeing. So as much as we can do Zoom [activities] and we can check in, it’s not the same as being physically there together every day.”

As pandemic restrictions eased, Pilla has come out the other end stronger—and with a third location. The newest, in Toronto’s historic Distillery district, opened in early 2022, and was a conversion from a competing brand.

“Going from one to two [locations], I didn’t notice as much of a difference. But going from two to three is an adjustment!” says Pilla of the multi-unit life. She splits her time according to what each location needs each week, but tries to pop in on each store almost every day. “I love to be in store, and I can’t be in three places at once, obviously, so I feel as if I’m always missing some time with people because I’m circulating around. But that gives lots of opportunities for my managers to step in and step up. So there are opportunities for growth for my team as I grow, which is fantastic.”

This sense of leadership is one of the lessons Pilla took from the pandemic. “I think the biggest [thing I learned] was not to focus on the trivial things or the small things, to not sweat the small stuff as much. I feel like the pandemic gave us all a different perspective—and it made us feel like we’re resilient, you know? We overcame this, we made it through—we can do anything.”

As a young woman entrepreneur, Pilla says she’s had the frustrating experience of not being taken seriously. While it’s happened with outside stakeholders, “at Fuzz, I’ve never been treated differently, or lesser-than, because of my age or gender.”

At Fuzz, “my age was never seen as a detractor, but rather seen as an asset,” she adds. “The fact that I didn’t have any preconceived notions and I was moldable was seen as a positive rather than a negative.”

Pilla says she’s found many opportunities for mentorship within the franchise system, both from the corporate team and her fellow franchisees. “I’m always picking the brains [of other franchisees] and seeing how I can copy what they’re doing, take a note from what they’re doing.” And that’s not to mention the two founders of the brand. “I feel like I know them personally, they’re so available to you. And obviously they’re two people I look up to very much—what they’ve built is so impressive, so incredible, that I’m honoured to be a part of it, honestly.”

Ultimately, Pilla says what’s most rewarding about being a franchisee is the satisfaction of leading a team. “It’s so rewarding to see these people shine, see them excel. You become a family.” Because Fuzz has a membership-based model, Pilla has also become very close with her customer base, making for community on all levels. “We have fantastic clients … we know them by name and we see them every month. It just makes it really fun to come into work.”

Pilla’s advice for anyone looking to buy a franchise is to choose a brand that aligns with your values. “I think that’s so much more important than going into an industry you love,” she explains. The practicalities of running a business and the ins and outs of the industry can be learned, but finding a company that offers the right support and values what you value is key.

And no matter what, she says, keep pushing. “There will be bumps in the road, there will be small failures—that’s inevitable. But it doesn’t say anything about who you are. Who you are as a business owner is [shown by] how you pick yourself up from those challenges, and keep moving forward.”

New or Tried and Tested?

New Kids on the Block

Iconic Brand: Hip to Be Square

Q: Where do territory rights begin and end in my franchise?