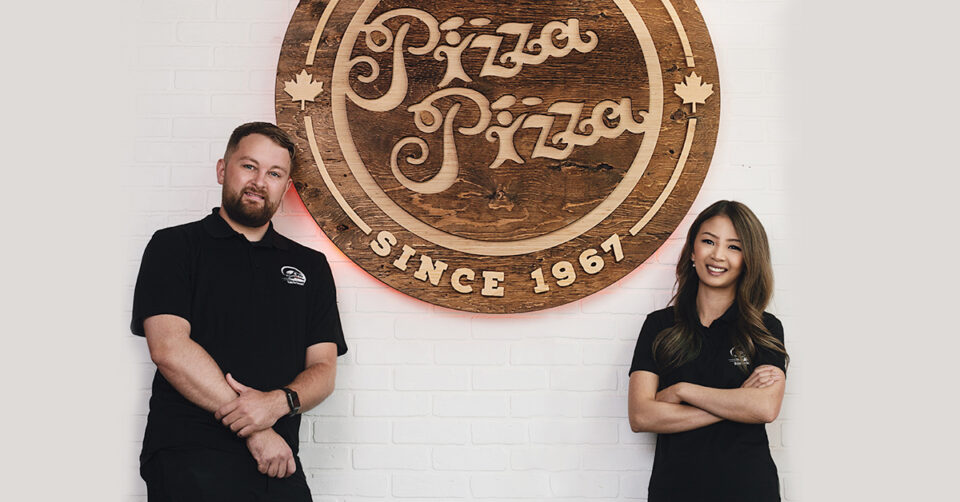 2020 was a rollercoaster for the food service industry, but one thing remained constant: Canadians’ love of pizza. According to Technomic’s 2020 Canadian Pizza Consumer Trend Report, the number of consumers that order pizza at least once a month grew by 14 per cent last year. In fact, 52 per cent of consumers say that pizza is a preferred menu item. It’s easy to see why young franchisees like Kim Le and James Jackson are clamouring for a piece of the pie.

The Vancouver-based couple opened their Pizza Pizza location in January 2020. Partners in business and in life, the pair met while working at a steakhouse. And as experts in high-end food and service, their skills easily transferred from selling hundred-dollar steaks to selling $7.99 walk-in pizza specials. “It’s the same passion. I love working in restaurants. I love how dynamic things are and how quickly things can change, and you’re always thinking on your feet,” says Le.

“I have 12 years of fine dining experience, so it was quite a shift, but worked to my benefit. I’ve been trained to see the details in everything,” Le adds. Jackson’s experience spans a variety of establishments, from sports bars to fine dining and bistros. “I went to culinary school, so I’m a certified chef. It certainly helps with day-to-day operations and future innovations,” he says. Prior to Pizza Pizza, the duo also worked as restaurant consultants, helping to increase efficiencies and overhaul menu designs and recipes.

When the couple decided to open something of their own, they turned to franchising. “We had the experience, passion, drive, and energy to do it, but we wanted a systematic approach to building a business, something that was already established,” says Le. “We’re a young couple, and we wanted to build this foundation for our family and our future.”

Though the Pizza Pizza brand was well-established in the east, it was looking for new opportunities in western provinces. “We found out they were coming to British Columbia, the last stop of their total Canadian domination,” says Le. With the full force of Pizza Pizza behind the B.C. expansion, it was the right choice for the enterprising duo. In addition to unparalleled brand recognition and tried-and-true practices, Le says the company has their finger on the pulse of what consumers really want, and can pivot and adapt to changing markets. In fact, the young, trendy, and vibrant Vancouver market brimmed with love and support: neighbours were knocking on the door before Le and Jackson’s location was even open.

The couple launched a mere two months before the pandemic hit. “Starting at the same time as a pandemic, what bigger challenge could there be?” asks Le. Like other businesses, they struggled to gain footing and make sense of ever-changing rules and public health orders, but they carried on, determined to succeed.

“It wasn’t business as usual,” says Le. “We were already working to gain the trust of the community around us, but now we had to up our game and work harder and faster. We had to treat customers better than our competitors, and make a better product, and we had to be consistent about it.”

Jackson adds that shifting to contactless delivery was also a challenge. “We lost that personal interaction with our customers—which is important in a hospitality setting, as first impressions count and a lot of our customers only order delivery.” To combat this, they got creative, writing jokes on the inside lids of the pizza boxes to add a personal touch and ignite the customer relationship.

With orders through third-party providers like SkiptheDishes on the rise, they also worked hard to recapture the market and guide customers back to ordering through the Pizza Pizza channels. “We’ve been able to create some good relationships with people by doing that. It’s a silver lining to the situation, and a positive for us,” says Jackson.

In the early days, Jackson and Le often worked from open to close, doing a lot of the deliveries themselves. “We still take most of the deliveries. Coming from our background, we understand that a little smile and ‘thank you’ goes a long way and resonates a lot of happy memories for our customers,” says Jackson. “We have to do everything we can to create that positive experience.”

“When I tell people about the support the franchisor offers, they don’t believe me because it’s so great,” says Le. Pizza Pizza’s intensive training spans three phases, from online training and certifications to hands-on training at the learning centre in Toronto. Realizing six weeks was a long time to be away, Pizza Pizza pivoted to create comprehensive training for their West Coast contingency in a three-week period rather than six. Training culminates with an in-store experience, where franchisees can troubleshoot issues first-hand prior to opening their doors. “Everyone is helpful and accessible. They’re always happy to have a conversation with you,” says Le.

The couple has clearly done something right. They were appointed as B.C. corporate trainers, an accomplishment they’re proud of and humbled by, and they added fundamental content to the phase three syllabus by drawing on their experience.

Knowing support is just a phone call away is a big benefit to any franchisee. The couple says business development manager Alex Chong was pivotal in fostering their success in the first year. “I can’t stress enough how much help he’s been, not just when we first opened, but continuously. He always picks up,” says Jackson. Le adds, “If he doesn’t know something, he’ll leave no stone unturned. He’ll get answers for you. He’s the hardest working person I’ve ever met… I would attribute a lot of our success in the B.C. market to him.”

For Jackson, there are big benefits to aligning with a franchise instead of launching a solo operation. There’s much to offer, from market analysis and menu campaigns to advertising and supply chain resources, “things people often skip over when they think about opening a restaurant.” For Jackson and Le, having these practices in place frees their time to focus on other areas, like interacting with customers. “We know all our regular customers by first name, because a lot of our time has been made available. If we were solo, we’d have to manage a lot of the back-of-house. Creating relationships with customers creates longevity of the business.”

Becoming franchisees at 28 years old, the couple says they didn’t have the confidence they have now. “Neither of us had operated a franchise restaurant before. I think there was a little self doubt, but our actions reassured our confidence, and now with Pizza Pizza investing in us, that self doubt is gone,” says Jackson. It was a leap of faith. “There’s always going to be a reason not to do something,” says Le. “We joined something that’s great for us, and has worked out well for both parties. It was the right choice at the right time.”

Jackson advises prospective franchisees to be prepared by doing their own research. “Failing to prepare is preparing to fail, which is a motto we use quite a lot in our store.” He adds that a key to success is investing in staff. In addition to vetting their staff properly prior to hiring, Jackson and Le foster a family environment, coming together as a team for Friday night family dinners. “When the staff have your respect, they care, and it becomes their restaurant as well.”

As young entrepreneurs, the duo rose to the challenge, taking the pizza game by storm with the intention of growing, expanding, and thriving. “We’ve found it’s a two-way street with Pizza Pizza,” says Le. “They’re always doing something new and innovative. They look to grow and impress the market, and that allows us to grow with them. We’ve had a great relationship so far, and it’s only going to get better.”

Millennials in Franchising: Top of the Line

The First Year: Nowhere to Go But Up!

Day in the Life: Easy Fix