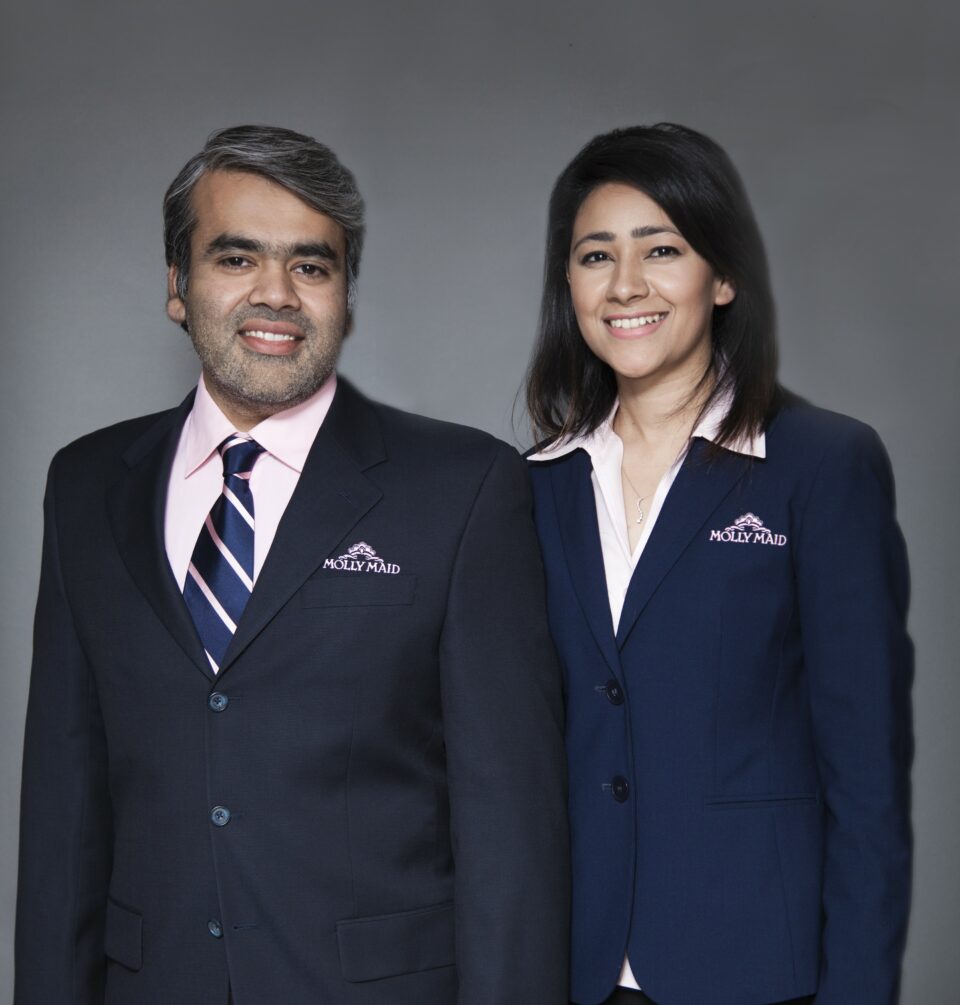 Khalid and Maryam Cheema joined forces as franchise partners and life partners, acting as the owners of two out of three MOLLY MAID territories in Winnipeg. After immigrating to Canada from Pakistan in 2016, they were looking for a flexible business that would allow them to spend time with their one-year-old daughter. Khalid had worked as a project manager in Pakistan, and yearned to leave the 9-to-5 office life, so he started to research franchises even before arriving in Canada. “At that time, I didn’t know that MOLLY MAID was a household name in Canada when it comes to residential cleaning,” recalls Khalid. He reached out to head office and when a territory came up in Winnipeg, the couple decided to move from Toronto, where they had initially settled.

The couple took on the Winnipeg East territory first, at the end of 2016, then also bought into the Northwest territory two years ago. While they each take charge of a territory and run them as separate businesses (Maryam handles the East territory), they share the administrative work such as bookkeeping and payroll. Their East territory employs around ten Home Service Professionals (HSPs) whereas the newer Northwest employs five or six. Most contracts are residential cleaning, offered in various frequencies from weekly to monthly to occasional.

The pandemic has been challenging for the business, especially for the territory that they purchased December 2019, given that cleaning work involves entering clients’ residences and that our HSPs work in pairs. Although the franchises were shut down by the government for a month or so, MOLLY MAID used that time to create the Healthy Home Cleaning System to ensure it was safe to clean clients’ homes. These closures did temporarily result in client cancellations and team members’ absences.

Despite these challenges, the couple is still enthusiastic about their operations. “Owning your own business gives you the opportunity to take it wherever you like,” says Maryam. “Especially for people like Khalid and myself raising a young family, it allows us to be flexible to the needs of our family and what our end goals are. I also enjoy it because I know whatever I’m putting into this, I’m going to personally benefit from.”

Khalid agrees, although he notes that there’s a lot of work involved in running a business. “Having flexible hours doesn’t mean that we’re putting in fewer hours. It’s just that the hours that we put in are our own. But I feel motivated that if I’m putting in this many hours and getting a return, that growth comes to us, not anyone else.”

While Maryam and Khalid say that their business startup was relatively smooth, there’s no denying that life is different in Canada. “Obviously, when you’re moving to a new country, there’s not only cultural differences. There’s a language difference, a different kind of work ethic, different setups. And to understand the community, you have to be really involved,” says Maryam. “Because a lot of our work is based on building rapport and personal connections with clients.”

Khalid adds that franchising is a good opportunity for newcomers to Canada, since the rules and support are already in place. “Going with a franchise is always easier than launching your own brand or company, because there’s already a set of standard operating procedures where the franchisor tells you how to do the business. You’re already set up for success,” he says, adding that taking over an existing franchise, as they did, meant that even the territory was up and running.

Maryam says that she appreciated the close-knit franchise community already in place as well. “We were already surrounded by our fellow franchisees all around Canada, and we could pick up the phone and call anybody at any time and ask any questions. There’s always the sense of community, which we really enjoy. Plus, we have support in terms of our business advisors and the expertise of so many people who are facing pretty much the same kinds of issues on a daily basis.”

In terms of advice, Khalid recommends that newcomers do their due diligence beforehand, and be ready for change. “If they’re coming from any other country, Canada is going to be slightly different. It’s a huge step, so they should come with an open mind and be willing to learn new things.”

The First Year: Crunching the Numbers