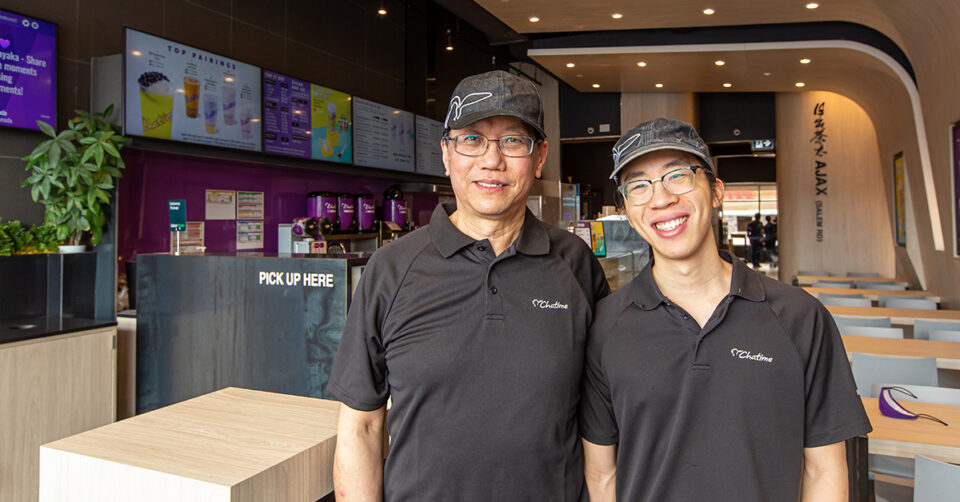 When you sit down to enjoy your favourite drink from a local tea or coffee shop, do you ever think about the individuals who run that store? Knowing it’s a locally owned small business might get you pondering about how much work went into getting your beverage brewed and into your hands for an afternoon pick-me-up.

Chatime franchisee, Keenan Wong, is one of the many individuals who serve bubble tea to local communities across Canada and worldwide. Wong opened his Ajax, Ontario store in August 2019 alongside his son, Anson Wong, and since then the duo have been serving up drinks together.

“[As a franchise] owner, you have more control in terms of what you really want to achieve,” says Wong. “Being a franchisee with Chatime is great because the turnkey operations and support provided allow me to overcome the learning curve quickly, and get the business up and running smoothly and efficiently in a short period of time.”

Though it might seem like Chatime has been bubbling in popularity for decades, the Taiwanese tea brand was introduced in Canada in 2011, reaching more than 60 locations across Ontario and British Columbia. Best known for its Pearl Milk Tea (which Wong recommends for all beginners), the franchise also serves flavoured milk tea, smoothies and slushies, and specialty drinks topped with pearls, brown sugar pearls, grass jelly, pudding, and more.

Wong brings a business degree and 30 years of supply chain management experience to his Chatime franchise, which he says is “nothing related to running retail operations.” His son Anson graduated university and began working in the bubble tea industry for about eight months before the two decided to partner together and open their own franchise.

“I think it’s important to have some kind of retail operations experience because it can be very overwhelming and different from working in a corporate environment,” says Wong of whether prospective franchisees should have a background in the food services industry. He points to the difference between sitting in an office everyday versus being on your feet for eight to 10 hours running the store and helping with customers where needed.

“Being a franchise owner isn’t necessarily just investing and hiring a manager and letting the operations run by itself,” says Wong. “You have to roll up your sleeves and get your hands dirty and get involved in the day-to-day operations.”

Since opening his franchise just over a year-and-a-half ago, Wong has prioritized the safety of his staff while continuing to serve his customers quickly and efficiently. A lot goes into running a franchise, and if you’ve ever visited a Chatime, you’ll know that peak hours get customers rolling in and lines building up. Which means Wong sometimes must step in to help where needed.

But when you throw a pandemic into that mix, the challenges put Wong and his son to the test. “There’s a lot of changes in adapting to this new environment. Making sure that staff are working in a safe environment is always a top priority for me. As I tell them, the most important thing is that they go home safe to their families,” says Wong.

“Initially with COVID-19, a lot of staff didn’t feel comfortable going to work and that’s very understandable because nobody knew what was going on and there’s a lot of uncertainties. Their parents are concerned about letting their kids go to work on the front lines, dealing with hundreds of customers a day,” Wong adds, noting that there were days where just he and his son kept the store open and serving customers while they had a shortage of staff.

Fortunately, working on the front lines was something Wong picked up early on in his franchise journey, as he was in the store seven days a week, working 12 to 14 hours a day. “Once everything is running smoothly, you can start to step back a little and let your staff take over the operations,” says Wong.

In order to protect staff and customers, Wong says his location was one of many stores that stopped allowing walk-in customers.  They relied fully on online orders, where customers could order beforehand and come in to pick up their drinks and go. That was in place for a couple of months until Chatime corporate office (and the rest of the world!) started to understand the pandemic.

Something good is bubbling

However, the challenges are boosted by Wong’s achievements with his franchise. “I think it’s actually performing much better than what I expected, not only financially, but also in terms of the whole experience as well,” says Wong. “Having looked back, I would say I really enjoy doing it, and I really enjoy going back to the store every day, even though at the very beginning, you have to put in a lot more time and effort.”

It seems all that effort paid off, as Wong says he’s planning to open a second location with Chatime in the near future.

He points to the many benefits of joining the franchise system. “One of the biggest advantages is the brand equity from Chatime, that it’s not like you’re starting up with your own bubble tea store and have to develop your own reputation and quality of drinks,” says Wong. “Once you have that running, people already know about Chatime, not just within Canada but it’s a brand that’s known worldwide, so I think that’s the biggest advantage.”

In terms of training and ongoing support, Wong adds that he had the opportunity to work in a corporate location for two weeks, which allowed him to learn the different positions within the store to understand the roles and responsibilities of each employee. He also received support to ensure that grand opening day ran smoothly.

So, are daily bubble tea cravings and retail experience enough to consider investing in a Chatime franchise? Wong advises that prospective franchisees should also consider their knack for customer service, as they’ll be interacting with people daily.

“I think for those that enjoy dealing with other people and are really into customer service, then it’s something that’s worth looking into [if you want] to be your own boss,” says Wong. “Being in corporate, on the one hand you get the feeling of, ‘okay, I have a job that is secure and provides a stable income.’ But on the other hand, being a franchise owner can be more challenging but a lot more rewarding in terms of the effort you put in and seeing the payback you’re getting. Not just financially, but in terms of being happier about what you’re actually doing.”

With the bustling environment at most Chatime stores, Wong emphasizes the importance of learning each position to help where needed. “Understand when you need more staff because it can get busy at different times of the day, so you need to know the flow of customers and schedule staff accordingly [to meet those needs],” advises Wong.

It seems like passion, hard work, and a bubbly personality will go a long way in a franchise career with Chatime.

Giving Back: From Their Hearts to Your Home