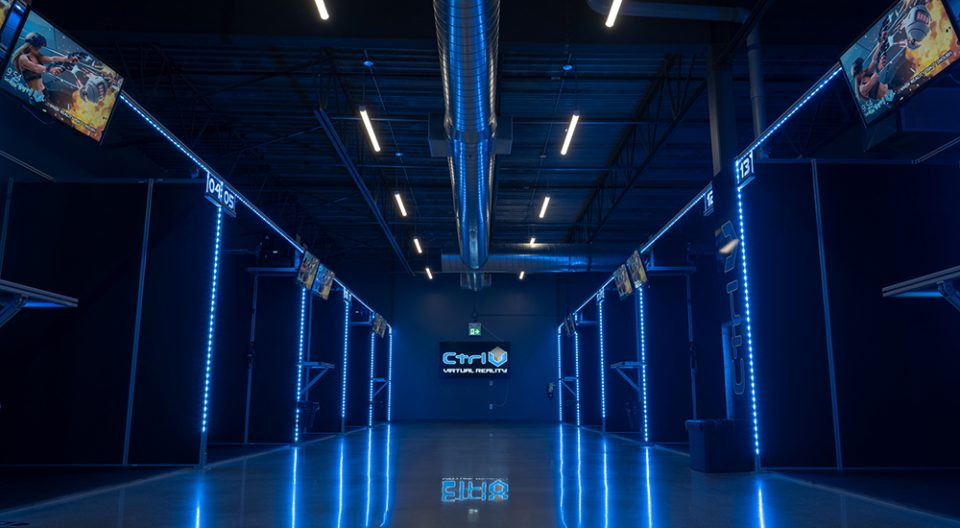 By now, most people have heard of virtual reality (VR), even if they haven’t all tried it. We’ve seen the futuristic, boxy-looking headsets that help to transport people into an alternate imaginary world in front of their eyes, and we’ve observed users flailing around as their brains are tricked into believing they’re walking the streets of an alien land or kung-fu fighting with an ancient foe. It looks like fun.

For Winnipeg, Manitoba franchisee Robert Fedoruk, that’s one of the best parts of owning a Ctrl V virtual reality arcade franchise. “Once people try it, the concept sells itself,” he says.

To confirm Fedoruk’s statement, you only need to visit the Ctrl V’s website. A collection of videos offer a sampling of the 50 games that the franchise offers at a play-by-the-hour rate, from the zombie shooter game Arizona Sunshine (Fedoruk’s most popular game) to Fruit Ninja, where you slice oranges and watermelons falling from the air with a sword (this writer’s favourite upon quick browse).

Ctrl V’s website also shares the origin story of this Canadian-based franchise, which was launched in summer 2016 by a trio of founders out of an old Blackberry building in Waterloo, Ontario. Now with locations across Canada and the United States, Ctrl V was North America’s first virtual reality arcade and is currently the world’s largest virtual reality arcade chain.

For Fedoruk, the journey to Ctrl V started when the entrepreneurship bug bit. A longtime manager for various corporations, he needed a change from life in an office and had started to research business opportunities. Then a TV show about virtual reality sparked his interest in VR. Could this be a business?

Fedoruk visited the one smaller VR store in Winnipeg and even made an undercover visit to Ctrl V’s main Waterloo location. He also looked in to starting a VR business himself, but when he crunched the numbers, he realized that the specialized space requirements and corporate licensing for the rights to popular games might be prohibitive.

“Even just looking at the licensing, it was not worth it on my own. That was the tilt towards the franchise route because Ctrl V had a pretty cool setup, better than anything else I had seen out there locally,” recalls Fedoruk, adding that he likes the fact that the franchise deals directly with game developers and other suppliers to bring down costs.

Joining the team and first-year challenges

Signing in September 2017, Fedoruk spent the fall acquiring and renovating a space that would suit his needs: 4,400 square feet in a strip mall close to Winnipeg’s largest shopping centre and downtown.  He opened his doors mid-December with a cool space featuring 16 separate VR stations, plus a party room.

While the business may sell itself once you’ve tried it, one of the biggest challenges that Fedoruk faced in his first year was getting people in the door. “Marketing is the absolute toughest part of the business that I continue to face to this day,” he says. He threw a big grand opening event, and continues to advertise on social media including Google AdWords, Facebook, and Instagram. He also advertises in the city’s leisure guide and on the radio.

Launching close to Christmas, he tried selling gift cards, which was another big win. “Gift cards were the best thing ever,” he says. “To this day, I sell a lot of gift cards because people want to buy experiences for their friends and family, instead of stuff.”

The party room, which seats 15 to 20, was another great investment. “One key differentiator for me was a room for private birthday parties. The existing place didn’t have that,” says Fedoruk. He doesn’t have a kitchen on-site, so he allows visitors to bring in outside food, which parents love. “Most of them order pizza, they bring in their own pop, they have their cake, open up gifts, out the door they go, and the next group comes in. That has been very beneficial.”

These demographics have driven his marketing strategy as well, even if they weren’t what he expected. “I would have thought males, millennials from age 20 to 35, and it probably started there, but tons of families come in with the party room,” he says. Catering to this interest in gaming in groups, he now offers discounts for parties of multiple gamers, who often engage in multiplayer games via connected headsets.

The surprise factor continues with the fact that a top pick for kids by far is a game called “Job Simulator” where kids can playact a day in the life of an occupation such as office worker or store clerk. “Kids get so fired up. I tell parents, ‘this is what your kids are going to play.’ They scoff at me and then sit there and watch their kids play that for the whole hour. It’s crazy,” says Fedoruk with a laugh.

Fedoruk has also been pleased with the amount of support from head office, beginning with an initial training session that includes classroom training and a weekend working at a store. “You work a weekend out there, basically doing what you do in your own shop – checking people in, making sure everybody’s set in their gear, helping them out.” After the initial training, the Ctrl V team came to help him build out his own location.

Ongoing support includes bi-weekly owner meetings, and a centralized intranet where owners can ask for help or report bugs and troubleshoot with other owners. Fedoruk says he appreciates the amount of support and software that the head office provides, including their own point-of-sale system, bookkeeping, and especially updates for the software and games. “Each week they’re pushing out updates, they’re really focused on that,” he says. The franchise also provides helpful analytics software that helps track repeat customers, their gaming preferences, and other information that’s useful for marketing.

An interest in technology but mostly in people

Fedoruk says that while the franchise provides lots of resources, franchisees should probably have a basic interest in technology. Although he’s not an obsessive gamer, Fedoruk did manage technical support desks at various points in his career so was quite comfortable with troubleshooting. Now he looks for employees (he currently has four of them, plus his wife) who have the same attitude.

Even more important is an interest in people and customer service. “If you don’t like talking to people or dealing with kids, you are going to be crushed. All of our staff have a lot of patience,” says Fedoruk, noting that while a five-minute video is supposed to provide an overview of the basics, not everyone is attentive while they’re excited to play, so you’re still delivering learning.

Fortunately for Fedoruk, people have also turned out to be the best part of the business. “It’s fun. I get to meet and help a lot of people every day. It’s fun watching people play,” he says, adding that screens posted above each station allow outsiders to see players grappling with their virtual worlds. “It is quite hilarious watching people do it. I get to laugh every day.”