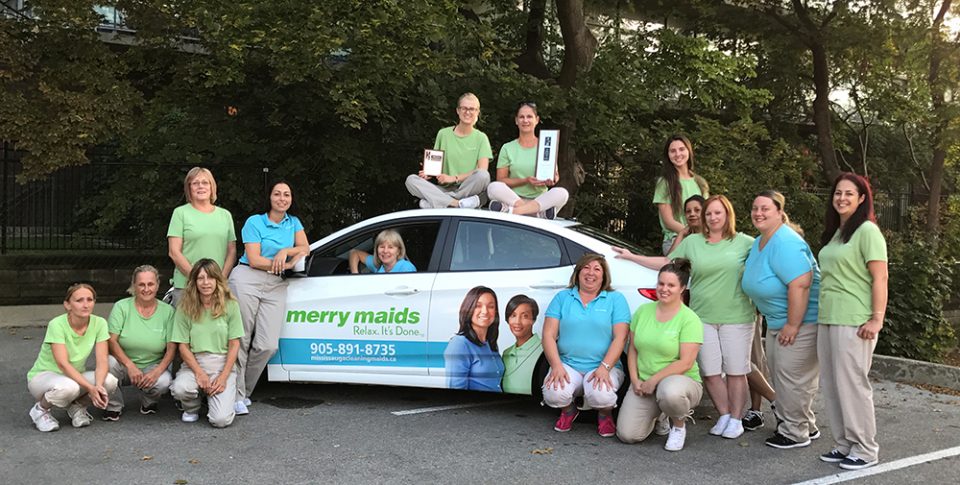 A typical day for Margaret Hammond is not always so typical. Every now and then, Hammond likes to shake things up, sprinkling the morning huddle (where staff meet to get the day’s cleaning assignments) with some humour.

“Sometimes we find a fun video to watch or put a joke up on the screen,” she says “We just try to find ways to put smiles on their faces before they leave for the day.”

In the hustle and bustle of daily life – involving anything from trying to beat the traffic to making sure the kids don’t miss the bus to everything in between – feeling motivated at work is not always easy.

But it’s never some herculean task either. Far from it. That’s because Hammond and her team are part of Merry Maids, a 74 franchise license enterprise that continues to sweep the nation. It’s a company known for delivering value to its customers.

Customers like busy families, seniors, or people who need assisted living, look to Merry Maids to swoop in and save them time. With Merry Maids, there is no need to sacrifice making a living for a clean home, or trade time with loved ones for a healthy place to live. Through its exceptional care and award-winning clean­ing systems, Merry Maids offers people in a time poor world the highly sought-after opportunity to have both. It provides its hundreds of clients freedom from house­hold chores, which in turn gives them the freedom to prioritize the things most important to them – a senti­ment often expressed in customer reviews.

Hammond never misses an opportunity to share these reviews with her staff first thing every morning. She cites the example of a poignant testimonial from a longtime client, who also became a recent widower.

“He called me telling me that his wife passed away the other day,” Hammond says, “And he was just thanking me, my staff, and the entire business for all the years that we’ve made their life so much better. We made their lives that much richer because we took away all the household chores his wife would normally do, buy­ing him more time to spend with her as she was dying.”

And even with the passing of his partner, Merry Maids remains a steadfast fixture in his life. “Now that she’s gone, he expressed how much he relies on us to take care of many of the tasks she took care of when she was alive and well.”

A Window of Opportunity

It’s stories like those of the heartwarming testimonial that fuel Hammond and her team, keeping them inspired each and every day.

And it’s the main reason why Hammond took the reins of the Merry Maids franchise in Mississauga, Ontario, back in 1999.

At that point, Hammond had been working for the pre­vious Merry Maids’ owner for four years. And she loved it. She was a trusted in-home professional who (like the maids that are part of her team today) was tasked with the unique responsibility of leaving every home she ser­viced better off than how she found it. But more than that she was part of community of people who forged memorable connections with their clients and equally strong ties with their teammates: “It felt more like a fam­ily than a job.” So when the previous owners were look­ing to sell that year, Hammond didn’t hesitate to jump on the opportunity. She went from maid to business owner only a few months later. “I absolutely love my job, which is why I started with them from the bottom and worked my way up.”

Now with nearly twenty years behind her, she’s at the height of her career. And given Merry Maids’ proven sys­tem, Hammond’s only advice for anyone looking to achieve the same success is simple: follow the system to a T.

“Merry Maids has been around for more than 35 years and they have tons of Merry Maids owners out there,” says Hammond. “I was never someone who was trying to reinvent the wheel, so for me it was pretty much A-B-C.”

With one caveat. Operating a franchise successfully also takes time, dedication and commitment.

Humble, hard-working, and passionate, for the past two decades, Hammond has done just that: “My atten­tion to business has never changed in that I still oversee everything and remain very active in the business.”

While Hammond’s passion for the business remains stronger than ever, the role she plays today looks quite different.

“When I first started the business, I was wearing every hat.” Fast-forward to 2018 and her team has expanded, blooming into a robust staff of dedicated maids who help people in need.

But as much as Merry Maids is about showing up for people who need it, Hammond is quick to credit the Merry Maid franchisors for the support they give her too. When Hammond needs a hand, she knows that help is just a phone call or short drive away.

“There are several numbers that I can call depending on the issue I’m facing that day,” she says. “And some­times I’m lucky that I’m part of the Greater Toronto Area, so sometimes I can just get in my car and drive to one of their nearby offices. The support I get is amazing.”

And that support is enhanced through Merry Maids’ advanced mentorship programs like “the Buddy System.”

“They assign a particular mentor depending on where you bought your fran­chise,” says Hammond, “And you connect with them about any issue you’re facing. They’ll even help after hours too.”

If none of those are viable options for assis­tance, there are a number of other channels like regional meetings, fran­chise share boards, and the Merry Maids’ intranet website, which enables franchise owners to imme­diately interact with corpo­rate head office and con­nect with franchisors based in Canada and the U.S. What’s more, Merry Maids franchisees have access to advanced training technol­ogies and systems, which have helped owners like Hammond, who prior to Merry Maids had no experience managing a business, run one with sweeping success.

“I’m not an accountant and don’t have any sort of accounting background, but that’s one of the things they teach me. They really mentor me.”

With technologies designed to propel business growth in place, endless opportunities for career devel­opment, strong franchisor support, and the ability to touch the lives of the community, it’s hard to point to just one thing that makes Hammond’s work week so enjoyable. Her success is a testament to the franchise model. Through franchising, finding this sort of fulfill­ment day in and day out, is indeed possible.

Celebrating the 2021 Franchisee of the Year Award Winners (VIDEO)

The First Year: Success on the St. Lawrence

The First Year: Working It Out