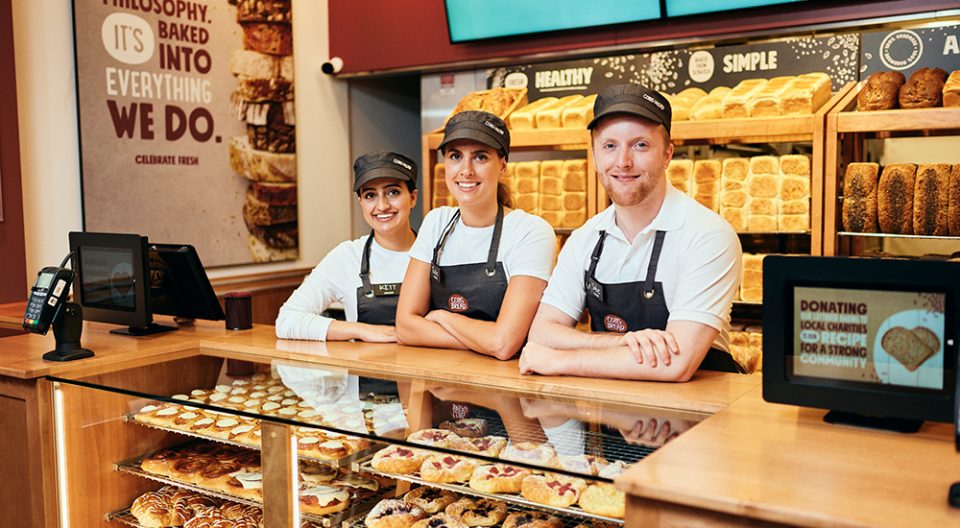 There’s nothing better than freshy baked bread. Stepping into a COBS Bread bakery is akin to strolling past a French boulangerie, its heady scent reminiscent of the warmth and cosiness of childhood kitchens. With today’s uncertainty, we’re reaching for creature comforts more than ever. COBS is proof that a brand can rise to a challenge, meet the needs of its community, and emerge stronger. They are a true iconic brand.

COBS Bread is a part of the Bakers Delight family, an Australian franchise started in 1980 by Roger and Lesley Gillespie. In 2003, the first Canadian COBS bakery opened its doors in Edgemont, North Vancouver. Today, bakeries across Canada serve fresh, handcrafted breads and treats at over 125 locations, with plans to continue to expand.

Vice president John Gilson says the original Canadian brand opened corporate stores that mirrored its Australian locations to establish the business before putting a franchisee’s capital at risk. “We wanted to get into the market and test the franchise out,” says Gilson.

As the brand matured, Canadians, who often opt for sweet treats, began to include bread in their purchases. “People realize the bread is healthy, has no additives and preservatives. The mentality changes from initial trial to dedication, and when you get to that dedication point, you find that a lot more bread is sold. That’s when we know we have our roots in a community.”

Over the years, the company has layered in additional products, like cinnamon buns and scones in a variety of flavours. Higher fibre bread, a seedy sunflower flax sourdough, and mini pizzas are among some of COBS Bread’s best sellers. “We are always looking to add to our offerings. We are very focused on what we do.”

Over the last few months, pandemic anxieties spurred customers to push the panic button and clear out grocery stores, including bakeries. Gilson says sales were at a record-high the first week of isolation before stabilizing and then creeping upward again. Ninety-five per cent of COBS bakeries have experienced consistent growth throughout this time. “More people are living at home, having lunch there, and not going out to eat. They are prepared to spend a little more on themselves and willing to spend more on a quality product, not that it costs more to purchase COBS product, but it’s the perception.”

COBS took its cues from grocery stores, implementing safeguards like social distancing markers and plexiglass barriers at counters. Since the stores can only welcome three customers at one time, many of the loaves were pre-sliced with the goal to move product quickly and limit lineups.

Gilson says franchisees with experience managing teams in a food environment start strong out of the gate, as they are accustomed to the demands. He adds that franchisees come from all walks of life and can learn the skills they need over time with the right support.

The COBS process allows prospective partners to invest in the idea before becoming a franchisee. A discovery day incorporates working in a store to get a firsthand feel of the environment and gauge initial impressions. A three-week period at the start of a four-month training process allows franchisees to further test the waters before becoming fully committed. “It’s a 10-year commitment, and we don’t want them to fail.”

With only one chance to impress a new community, Gilson says opening support is a big priority. An operations team provides ongoing support, gradually pulling back when the franchisee is ready. “We’d rather invest that time initially and get it right the first time.”

Gilson advises prospective franchisees to look at other businesses and ask questions. “See what kind of support you will get. Talk to other franchisees. Ask them what it’s like. Are they happy? Do they make money? Ask those honest questions.” He adds that investing in a recession-proof concept is fruitful in the long term. When crisis hit, COBS remained steady and predictable, proof that tasty, fresh-baked bread is always in style.

Jeremy Banning opened his first COBS location in Calgary in 2015. Today, he owns three locations, with a fourth one in the works. A long-time employee of the A&W corporate office, Banning was able to use his experience to leverage his COBS success while staying closer to home for his young family. When starting out, he says one of the keys to success was to be on the ground, in the store and in the community, connecting with staff and customers.

“I learned how to make bread from the ground up, because if all else fails, you are the head baker. It’s definitely a wide appeal for those willing to work hard and come in for those early hours. I went from not being able to bake to running a bake team on my own.”

There’s camaraderie in the COBS family. The store Banning trained at became a partner store, where he could reach out and talk about some of his struggles. A few years later, he helped train a new location and in turn, became a partner store for him. “COBS has done a really good job of developing a community within their bakeries.”

To add a little fun to function, regional meetings where bakers and franchisees come together allow franchisees to network and allow bakers to rise to the top with a bread competition. “In addition to sharing sales, you can visually see who has overcome making a difficult product or see what looks extra good for customers. It helps identify where the expertise is and encourages franchisees on what they can do better.”

With the current pandemic, Banning’s stores were busy during the panic-buying period. After a short decline, sales are back to normal. “You have to deal with some of that volatility, but the positive thing is that bread is a fresh product and the purchase cycle is quick.”

He adds that as long as customers are coming in, they can solve challenges like making different types of bread to fill the needs of people eating at home. “When you are associated with a good brand, sales can be stronger and more consistent, so when things like this happen, you still have that time to react and make changes because your sales don’t disappear in one day.”

Banning says their simple approach of bread made fresh with no preservatives and colours, and leftovers that go to charities daily, is a formula that fits well with a customer’s desire right now to know where their food comes from and what it’s made of. “The thing that attracted me to COBS is being in a business in the community, so times like this, we’re your traditional-style local bakery where bread gets made every day and you know what’s in it. I think that helps when people are scared.”

Banning says the first couple of years in business is about learning and growing the team. “There’s artistry in bread baking. You want to be able to tell the difference between a great loaf of bread and an average loaf of bread. There’s a skill to own and pass along, too.”

He says that when franchisees are connected to a business that is their primary source of income, they are not distracted. “With the focus on being in the stores, there’s a little more responsibility. You are not sitting on the beach checking your emails to see how the store is doing.  You are working hard now to sit on the beach later.”

Banning says that the sky is the limit for COBS franchisees if they are on board to get up early and work hard while fostering soft skills to grow a solid team. “COBS has been around long enough to be stable, and it’s growing exponentially right now so it’s a good opportunity.”

Beyond the great business opportunity, he also enjoys the community connection, baking with local Boy Scout troops or helping a family through a tough time. “It’s really the type of business that makes you feel like you are a benefit to the community. You are feeding people and you are feeding them something healthy.” It’s proof that bread is happiness. Bread is nourishment. Bread is love.

A Day in the Life: A Time for Transition