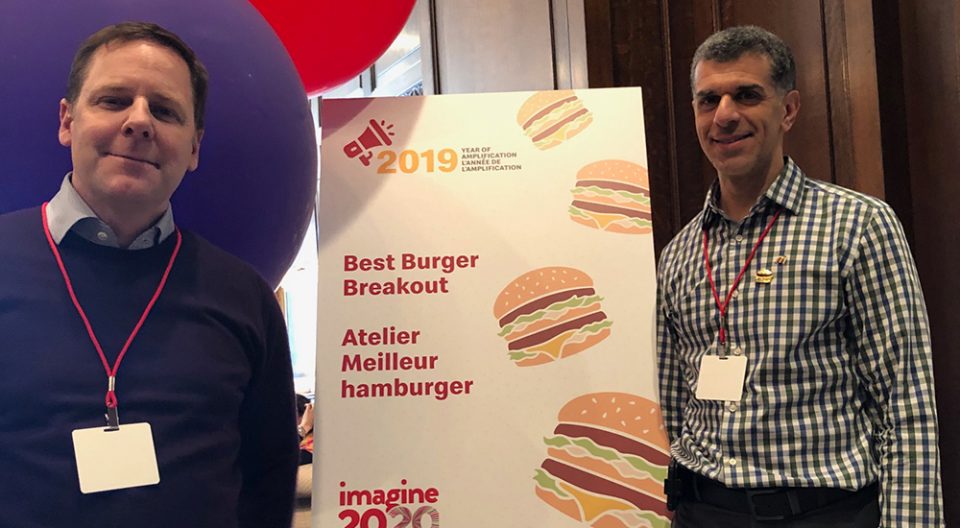 It was January 2014, and Pierre Marois and his husband, Pierre Jacoub, were ready for a change. Marois had spent the previous 15 years as a vice-president at an engineering firm in Montreal, while Jacoub had been a project manager at TD Insurance. Both in their early 40s at the time, Marois and Jacoub wanted a new adventure: their own business. One day,  Marois turned to his husband and said, “Why not McDonald’s?”

“Are you serious?” replied Jacoub. Sure, they were both huge fans of the brand and wanted the backing of a strong franchise, but neither had experience running a restaurant or even knew any McDonald’s franchisees.

It didn’t take long for Jacoub to get excited too; he rapidly filled out the online application. Now they have five McDonald’s locations in Nova Scotia, but looking back, the two admit that their initial decision was based mostly on instinct.

Once Jacoub and Marois went through multiple interviews and an in-restaurant evaluation, they were approved in June 2014. Marois elected to complete training part-time, completing over a year and a half of part-time training that totalled 1,500 hours of in-restaurant instruction, plus classes at head offices in Montreal and Chicago. In the midst of all of it, they also welcomed twins Justin and Nora in 2015, who were born through surrogacy. Once training was completed, the Pierres finally got the call they were waiting for: two restaurants were available in Yarmouth and Barrington Passage, Nova Scotia.

Some view training and location as barriers, for Marois they were attractors, given they speak to the success of the brand, and the ability to purchase proven existing businesses.

The two south shore towns  weren’t the first locations the Pierres had in mind. However, when the two visited that fall, they quickly realized it would be the change they were ready for. “We were honestly a little hesitant at the beginning. As a gay couple with young children moving to a smaller communinity, we did not know what to expect,” says Jacoub. “But when we visited, it didn’t take but a moment to say, ‘Oh yeah, those fears are allayed.’ Pretty much the minute we got out of the airport.”

Off to a successful start

They officially took over the two restaurants in February 2018, and Jacoub says they had a “very successful” first year at both restaurants. That was mainly due to the experienced and seasoned management teams already in place. Employees and guests were very welcoming too. Some even introduced them to the mayor and different business owners in the area.

There were challenges, of course. Leaving family and friends in Montreal and finding daycare wasn’t easy, nor was finding the right balance of personal and professional time. “When you’re passionate about something, and you’ve invested so much time and money, you don’t always know when to turn off that switch,” says Jacoub. Eventually, though, they learned to dedicate Sundays as family-only days and to be more efficient with their time. Sometimes that means heading into the home office after the kids go to bed to get work done.

By the summer of 2019, they were ready to grow, and on August 1st, they purchased the Liverpool McDonald’s and two more in Bridgewater, including the Walmart location. Pandemic aside, that was another year of firsts. The former owner had been in place for 48 years and had a culture that was different than what the new ones wanted to cultivate. For the Pierres, part of that culture is about making sure guests know how thankful the restaurant is for their business. Another part is about making sure they are offering the best that McDonald’s has to offer, which is why the Pierres completely renovated two of their restaurants.

The third part of that culture is about investing in their people. That means listening to the input of every employee and sending them to training, as well as hiring a human resources manager, says Jacoub. “We’re a big company now, employing 260 people, so we wanted to make sure there is someone dedicated full-time to our people. And, it’s not just processing payroll and doing logistical things — it’s making sure that our people are happy.”

During the pandemic, the HR manager has been calling employees to make sure that they are doing well, and staying safe. Overall, though, Jacoub says the entire team has faced this unprecedented challenge with a “grace and dedication that gives me goosebumps.”

There are a lot of questions about what the future will hold. The Pierres say they feel fortunate to be part of the McDonald’s system. When Marois met with a franchisee in Montreal in 2014, he remembers him saying that McDonald’s would never let him down. “And that’s more true now than ever,” says Marois. “At the beginning of the crisis, our CEO Chris [Kempczinski] sent us a message that said we will do the right thing for our employees, for our guests, for our brand, and nobody will fail.”

They’re passionate about giving back to the province and community that has been so welcoming. That has included dedicating time and/or funds to Ronald McDonald House Charities, Red Cross, the Yarmouth Hospital Foundation, Gay Pride, and even the weekly Mayor’s Tea at the Yarmouth Information Centre in the summer, where they welcome visitors and promote the area.

As for any words of wisdom the Pierres would share with anyone considering McDonald’s as a franchisee, it’s simply this: enjoy the voyage. “Just know that if you sell everything, pack your bags, and move — it’s going to be a fantastic adventure,” says Marois. “When I look back, it’s fantastic how we’ve been rewarded and privileged with McDonald’s.”

Woman of the Franchising World