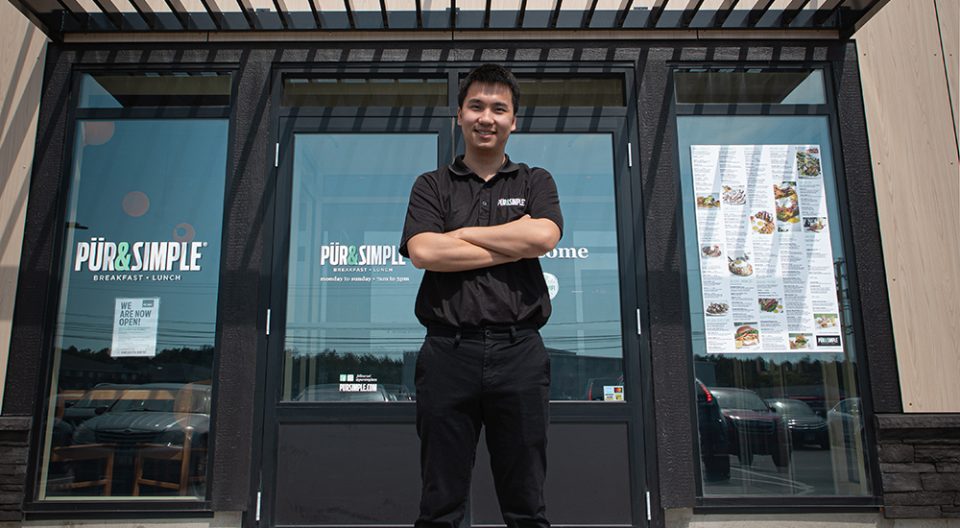 With a few challenges under his belt, millennial franchisee Tianchen Liu is ready to thrive with Pür & Simple

His visit may have been almost two years ago, but Tianchen Liu remembers exactly what he ordered the first time he ate at a Pür & Simple breakfast franchise: the Baconado, a skillet filled with bacon, avocado, tomato, pepper, onions, and white cheddar on a bed of home fries.  Clearly, the meal made an impression.

“The food’s quality, and the service I received, were perfect. I had never experienced anything like that in New Brunswick,” says Liu. Fast forward to this spring, and Liu paid the restaurant an even higher compliment: he became a franchisee.

Besides the food, Liu says that Pür & Simple also impressed him with its brisk trade, especially in a place like Moncton, New Brunswick, not known for its abundance of brunch spots. Walking in on a weekday, the store was full of happy customers. “It was a Monday! For brunch? A Monday would be their slowest day,” notes Liu.

He was also impressed by the size of the restaurant’s menu and the fact that the choices were just a bit more artisanal than the average (they have eight variations of eggs Benedict and five versions of avocado toast, just to name a couple of categories). He also liked the fact that the restaurant’s price point is affordable, and its food is on the healthy side, a trend he sees as having growth potential.

Browsing the menu on the day of his first visit, Liu noticed they were on the lookout for franchisees in Fredericton. After emailing and then meeting with the franchisor, Liu confirmed Pür & Simple was a good fit (he had already been looking into other quick service options).

Liu also had something to offer the franchisor: the perfect Fredericton location. Even though he’s only 27, owning a restaurant is somewhat of a second career for Liu, who is already an established real estate investor with clients in China and the United States. That meant that he already owned a strip mall, potentially perfect for the new venture. Showing the franchisor clinched the deal, not least because the strip mall is so ideally located. “They think it’s a great location,” says Liu. “We have 5,000 apartments within three miles, with lots of offices and car dealerships.”

After signing with Pür & Simple, Liu got to work: because he owned the strip mall, he was able to customize the space even further to configure it ideally for a restaurant. He also underwent training at Pür & Simple’s head office location in Montreal, three weeks of everything from paperwork to restaurant management to marketing. Things were moving fast, but on track for a great spring launch on April 23, 2020.

Yes, April. To back up, Liu took his three weeks of training in March. When the world shut down due to COVID-19.

Calm in a crisis

For someone who had his business opening delayed by a global pandemic, Liu speaks pretty optimistically. Yes, he had hired 29 staff members. Yes, he had to stall the prospect of any revenue for who knew how long (remember when the world thought it would only be a couple of weeks?). Yes, the thrill of that first breakfast rush would have to wait.

In spite of all that, though, Liu says there were reasons to be philosophical in the face of adversity. “We had no inventory, no staff scheduled, no expenses,” Liu explains, expressing gratitude that he hadn’t faced the same loss of thousands of dollars’ worth of food as some restaurants had. Maybe some of his patience was also rooted in the fact that this was not the restaurant’s first delay: he was supposed to launch in the fall but the contractor he’d hired had passed away and he’d had to make other arrangements. Perhaps this restaurant just had its own timeline in mind.

By delaying opening day to June, Liu adds that he was also able to focus on implementing strategies important to making both staff and customers feel safe in the “new normal” of a pandemic. “We got fully loaded,” says Liu. “We put arrows on the ground and signage on the wall, and masks for our staff. We got all ready to go.”

Liu was also glad to see that the franchise’s commitment to uniformity, organization, and open communication didn’t waver during the crisis. “While some restaurant owners may print their own arrows, Pür & Simple created new signage, with their own logo. It looked perfect in the restaurant.”

Liu also says that the pandemic circumstances also offered the potential to avert one of the bigger challenges of a busy restaurant business: the possibility that new staff would be stressed or overwhelmed by the busy pace of a restaurant. Liu believes that the forced restrictions limiting restaurant capacity may have helped his staff ramp up more comfortably to working in a fast-paced, customer-focused environment. “We were able to open with half the seating, I would say 60 per cent.”

Perhaps his spirits also remained high because he was really pleased with his team and knew they would be ready to go once things opened up. “The team at the front of house, which is server and host, they’re perfect. Most of them are part-time students, or people who just graduated. Fantastic resumes and they’ve worked in different restaurants. I think my team is really good,” says Liu, adding that he hired a general manager with 20 years of restaurant experience.

On hold like the rest of us during the pandemic, Liu decided to wait on the radio ads, Facebook marketing, and other geotargeted online ads that were the hallmark of his franchise’s marketing plan, although he did send out some postcards around the neighbourhood. But again, with social distancing, this was not the standard launch, even in June. “Normally with the franchise’s other openings, they do radio ads a week before opening, but we all agreed that we might want to stop because we don’t want overflow the restaurant when we don’t have open capacity,” says Liu.

Liu is also gearing himself up for the new venture, where he plans to throw himself into the operations side of the business. “I’m definitely going to be a hands-on owner,” he says.

When it comes to franchising advice, Liu advises by example. He looked into six different restaurant franchises and when he picked Pür & Simple, he visited every single Pür & Simple location in New Brunswick, plus the one in Halifax, to confirm the brand’s consistency. “At every store, I experienced the same quality of service and food. That’s key for franchise restaurants,” he says.

He also lets people discover that he’s wiser than his years, admitting that he has had people seem skeptical of his abilities due to age. “Once we know each other, they will know that I’m a decent man. That I can do business with them just as good as other people. And I guess the upside is because I’m younger, I’m willing to try new stuff and my mind is more open,” he says.

Having launched in the COVID-19 era was also a learning experience, one that only cements the need to go above and beyond. “It’s all about making the customer feel safe,” says Liu.